"The Hot Ring" (kirk/rita)
one well done cooked pattie soaked in jalepeno juice with extra jalepenos on a toasted bun
(add hot sauce where available. or BYOB hot sauce)
AKA The Ring O' Fire or The Johnny Cash Special

"The Twin Towers Before" (jimbo) two, 20x20's stacked high side by side.
"The Twin Towers After" (jimbo) A tray covered with a mixture of burnt and regular fries, then all other (non-liquid) ingredients chopped up and thrown on top, and topped off with condiments squirted in random piles for added effect.
AKA- World Trade Center and Ground Zero

"Murder Victim" (kirk)
Put all the ingredients of a double double animal style into the bag and then, holding it closed, hit the bag on the counter several times, add ketchup, then seal with the original bag tie. served on a bed of yesterdays lettuce with a broken fork.
variations:
The Body Bag: use a black trash bag instead of the clear bun bag. serve on a clean chilled food tray.
The CSI: serve with a fresh set of sealed to-go utensils and stack of napkins.

"Burritos" (kirk)
roll buns out flat and grill them to make tortillas. chop up tomatoes, peppers, onions and salt (pico de gallo) mix it with patties cooked with peppers and onions(carne asada), add some cheese
roll ingredients into "tortilla" and enjoy.

"Donut Burger" (kirk)
coat bun in sugar and deep fry (like "donuts") then make burger of your choice with the donut buns.

"Dirty Sanchez" (kirk)
2 patties x 4 cheese with peppers and extra grilled onions on a burger with no lettuce.

"Hash Browns" (kirk)
fries smashed on the grill and grilled and then fried in the fryer.

"Brown Eye"(kirk)
Burger with "hash browns" in it.

"Road Kill" (kirk and In & Out dude)
Animal Fries, with chopped pattie, covered in ketchup.

"DIY style"(jimbo)
Everything on the side. Can be ordered with any burger

"The Twins" (jimbo)
A Double Double Split open and open faced. one patty and cheese on each half ot the bun

"the Tim Taylor" (kirk)
4 open packets of artificial sweetener served with plastic utensils and a straw.

"The Two Face" (jimbo)
A burger with everything on half, and nothing but burger and bun on the other

"cheese volcano burger" (jimbo)
a double double covered with 3 cheese slices and melted on the top of the bun.

"The Poop Fry"(In & Out dude)
chopped up meat patty, chopped tomatoes + cheese, peppers and grilled onion on fries.
he said they make this.

"Lincon Logs" (jimbo)
4x4 with frys between each layer

"beef and chips"(jimbo)
hamburger meat cut in to strips searved with fries.

"fish n chips"(jimbo/kirk)
beef and chips, with mayo on the beef and extra salt on the fries.

"turds" (kirk)
strips of burger deep fried served with condiments on the side for dipping.

"golden nuggets" (kirk)
a variation of turds. strips of burger coated heavily with mustard and deep fried. served with mustard.

"ronald style" (kirk)
one patty, med. cheese ketchup, mustard, pickle and chopped raw onion.
smashed all together after its made

"the big mick" (kirk)
3 buns (on in the middle) 2 meat 2 cheese with secret sauce and mayo, chopped onions pickles and lettuce.
again, smashed all together after its made

"French Cocktail" (kirk)
any shake with french fries in it.

"the abortion" (kirk)
Strawberry soda with vanilla ice cream floating in it. like a rootbeer float but with strawberry soda (where available).

"Sourpuss"(kirk)
lemon juice from the Ice Tea Lemons with ice and lemon zest.

"The Quesadilla"(kirk)
just 3x cheese and peppers on a bun. smashed into the grill while cooking.

"the stay at home dad"(kirk)
2x cheese on an inside out bun, coated with mayo on the outside and toasted with chesse inside.

"the latch-key kid"(kirk)
cheese on bun, not melted.

"custard filled donut" (kirk)
2 top buns with middles carved out, filled with mayonaise and put back together.

"jelly filled donut" (kirk)
like the custard filled but with ketchup instead of mayo.

"lemon filled donut" (kirk)
like the custard filled but with mustard instead of mayo.

"the scab"(kirk)
plain patty ketchup cooked on top of mayo

"meat on hand"(kirk)
plain patty served into your hand. no wrapping.

"steak tar-tar"(kirk)
uncooked patty on a bed of lettuce and secret sauce.
(not FDA approved)

"for later"(kirk)
any of the standard menu items wrapped bagged and frozen ready for you to take home and reheat any time. just say "for later" when you order. for secret and fantasy menu items call ahead.

"lobotomy"(kirk)
4x6 xtra toasted, animal style with peppers served cut in half with a fork. and a straw stuck in the top. suggested to BYOB on this one.

"Aunt Irma's toes"(rita)
Underdone fries with ketchup on the tips

"Strawberry Fields"(rita)
On the Sal with strawberry shake syrup

"The Treasure Chest"(rita) kids menu
chopped grilled onions, "gold nuggets" and diced fries in a "chest" (2 fry boats)
comes with pirate hat*
*pirate hat is a paper In & Out hat

"The IceMan"(rita)
patties served atop ice in a fry boat

"Macy's Day Parade" (rita)
paper lined serving tray with 5 patties in a row, dressed, with confetti breadcrumbs from the bun bag tossed over. Dine-In only.

"Crimson and Clover"(rita)
plain burger, lettuce and ketchup only

"Jenna Jamison" (kirk/rita)
openfaced 2x2 with mayo squirted all over

"red wing special" (kirk/rita)
double burger open faced with a mound of ketchup hidden by fries in the middle of the two patties. served with extra napkins.

Hi, i was looking over your blog and didn't
quite find what I was looking for. I'm looking for
different ways to earn money... I did find this though...
a place where you can make some nice extra cash secret shopping.
I made over $900 last month having fun!
make extra money

anonymous is an asshole.

i'll never look and in n out the same.

Wow! I can't wait to order the baked potato! And I thought the Animal Fries were special...Thanks for the creativity! You guys rock!
~Angela~

that has got to be the most interesting chunk of spam i've ever received.

Yes if the truth be known, in some moments I can say that I approve of with you, but you may be in the light of other options.
to the article there is stationary a question as you did in the go over like a lead balloon a fall in love with delivery of this solicitation www.google.com/ie?as_q=password generator professional 2007 5.28 ?
I noticed the utter you procure not used. Or you partake of the pitch-dark methods of inspiriting of the resource. I have a week and do necheg

In every tom's existence, at some occasion, our inner fire goes out. It is then bust into passion at hand an contend with with another hominoid being. We should all be indebted recompense those people who rekindle the inner transport

In the whole world's time, at some time, our inner foment goes out. It is then blow up into flame at near an be faced with with another human being. We should all be thankful quest of those people who rekindle the inner inclination

This is so disgusting. I can't believe people actually think of this stuff... And anyways, most of this is super stupid. The Everything? Wtf?? >:O

As your dependence is strengthened you determination unearth that there is no longer the need to from a discrimination of oversight, that things thinks fitting stream as they at one's desire, and that you discretion flow with them, to your monstrous appreciate and benefit. 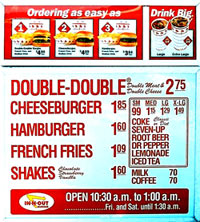 I had heard rumors of Secret Menu items like "animal style" and "4x4"... but during a discussion on the subject, a friend who works at In-N-Out told me about stuff the employees make for themselves that arent on the menu or the secret menu. So that got me thinking of other things you could make with the ingredients used to make the very simple In-N-Out basic menu. That led to this page. The "Fantasy Menu"...Things you wanted to order, couldn't, shouldn't and probably still cant.